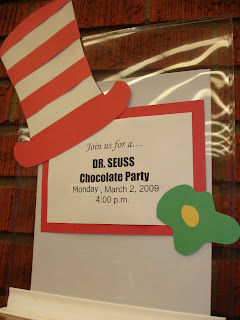 Probably because I don't have television service, Sudo Nimm and I come up with alternative activities to entertain the family. Sometimes, we brainstorm while gorging on strawberries, which can lead to mind-altering perspectives on life, the universe, and wardrobe selection.
(If you think I'm making this up, John Lennon knew what I was talking about-- "Strawberry Fields Forever," anyone?)
So, this week we came up with the idea of a Seuss-athon-- attending as many Dr. Seuss parties as humanly (and motherly) possible in honor of the Good Doctor's natal coming 105 years ago.
Tonight, on the official date of the birth of serious nonsense in this country, we attended a Dr. Seuss "Chocolate Party" at the Hastings Ranch Branch of the Pasadena Public Library. 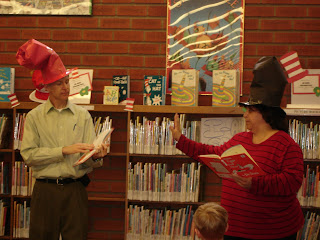 The above photo depicts a spirited reading of Green Eggs and Ham, complete with the eponymous epicurian delight, of course!
I'll let you guess which one is trying to decline Sam-I-Am's beseechings.

The party shifted into high gear with a game of Seuss Bingo. Between the M&M "chips" and the jumbo Hershey's chocolate bar prizes, this party was really starting to live up to its name.
I'm not so sure how well the game worked for those little ones who decided to eat it instead, but, anyway...

The chocolate climax of the party came in the form of fondue.

Here is the chocolate fondue fountain only moments before an unfortunate mishap. Yes, librarians endure much in the line of fire, including the effects of a fondue malfunction. Oh well! "That's what dry cleaners are for," he said.

It would be too graphic to recount all the details. Besides, that's what imaginations are for.