Having Fun With Bertolt Brecht From Head to Tome 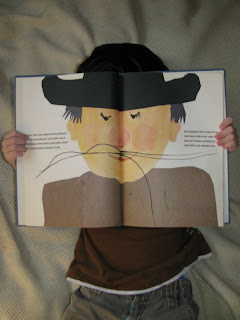 In the above photo, my son takes on the role of Uncle Ede from head to tome in Bertolt Brecht's Onkel Ede Hat Einen Schnurrbart.

A book of twelve Kinderlieder, or children's songs, the titular piece translates roughly as such:

Uncle Ede Has a Moustache

Uncle Ede has a moustache
The moustache has five hairs.
And so that he doesn't lose any of them
Each one has a name.

They're named Fritz and Otto
And Max and Karl and Paul.
Max is somewhat sickly
And Fritz is somewhat lazy.

What are your must-have moustache picture books? Add them in the comments section if you feel so moved. Thanks!