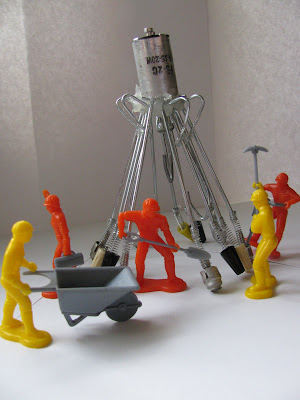 I've been reeling since my recent discovery concerning the nature of the universe. As might be expected, this paradigm-shifting discovery has brought on a bad case of existential crisis mixed with a touch of post-nasal drip.

Previously, many of my afternoons had been spent managing my citrus-colored minions, as they painstakingly built a stylish, Sputnik-like craft designed to seek out and prove the existence of parallel universes. No more. For the humble book festival in my own backyard has changed Everything, with a capital "e." 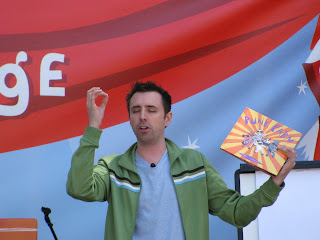 And here's the man around whom the fabric of space-time tore like a cheap picture book in a toddler's mouth-- Jarrett Krosoczka.

Here's a picture of Jarrett channeling his awesomeness. This doesn't take but a few seconds, by the way, for Mr. K is very extremely awesome (just ask my son, a big Lunch Lady fan).

Nobel prize-winning scientists, with whom I've consulted, believe that it was during this very awesomeness-channeling moment when life as we know it changed forever.

For a brief period between those two points in time, Universe A212 and Universe BN89 existed simultaneously on the same space-time continuum. And, yes, blog readers, I was there to capture every quantum-physics-tickling moment of it. 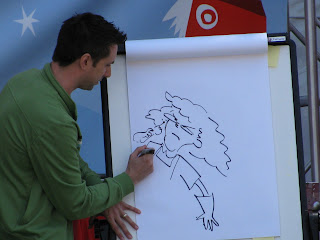 Universe A212 Jarrett does battle with Universe BN89 Jarrett to see who can draw the better Lunch Lady. Methinks it's a "draw," but I wouldn't want to get between two space-time bending doppelgangers, would you? 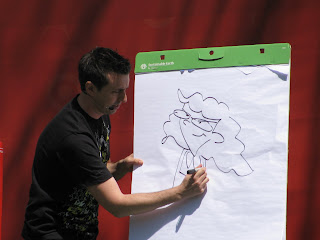 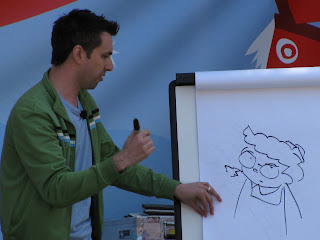 Universe BN89 Jarrett points to his face, insisting that he was the first Jarrett to come up with the clever Q-styled "mole communicator" for the Lunch Lady's sidekick/assistant, Betty. 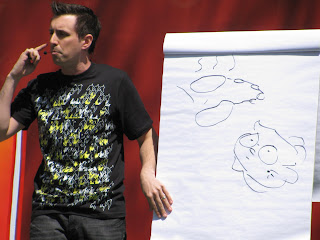 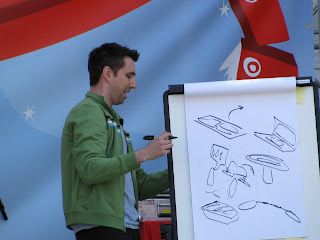 The dueling doppelgangers challenge each other to a "Betty's gadgets" draw-off. I think I have to give it to the Universe A212 Jarrett this time. He got those totally tubular fishstick nunchucks in there. 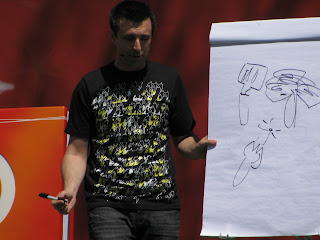 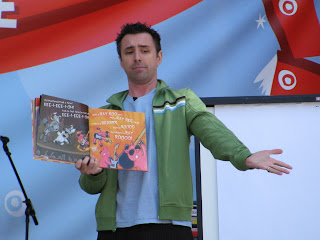 Now let's follow the Jarretts through a reading of Punk Farm. Universe A212 Jarrett is thoughtful enough to let the other Jarrett go first. 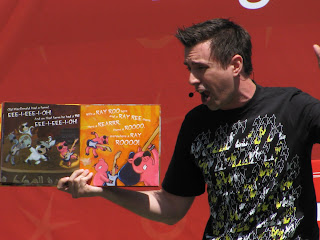 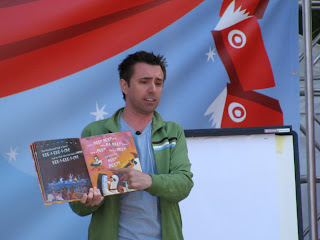 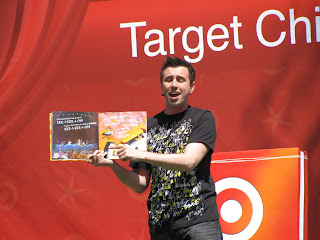 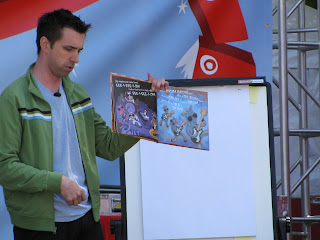 The battle rages on... 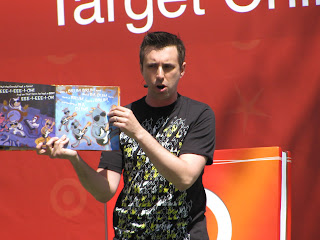 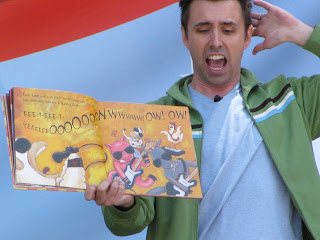 A high pitch frequency pulses through the UCLA campus, signaling the disentangling of Universe A212 from Universe BN89. In the next nano-second, the two Jarretts will be individuated again and free to return to their respective universes. They have finished making history. 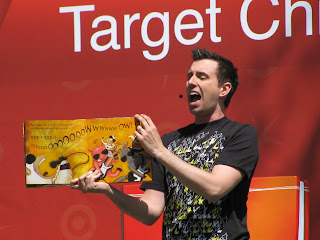 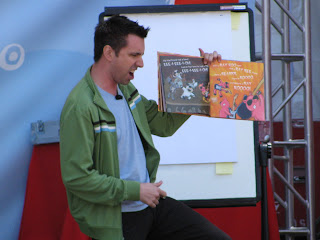 And they all lived happily ever after. Feel free to rock on with your bad selves, a la Jarrett.
P.S. Even though there was only one picture book panel at the whole festival (can we change this, folks? While we're at it, how about book prizes for PB, MG, children's poetry, and children's graphic novels?), it was super rad. Hats off to Sonja Bolle for moderating a hilarious discussion with Kadir Nelson, David Shannon, and Pam Munoz Ryan.