"52 Ways to Use Your Library Card" Challenge: #6 Become a Spoke 'n Word Advocate (Use As a Spoke Card) 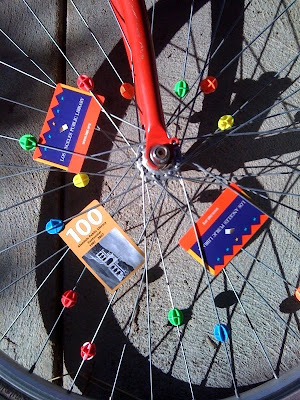 Painstaking research by library card scientists has revealed that library cards secretly covet the lifestyle of another kind of card -- the spoke card.

Now it's not that library cards don't want to be library cards anymore, it's just that they wouldn't mind getting out on the open road now and then with the wind whipping against their barcodes and the smell of bike grease in, well, whatever it is they breathe through.

So, wedge your library card (or probably a color-photocopied and laminated version) between your spokes, and turn your velo-ride into a bikebrary (or biciloteca for the Spanish-speaking among you). Added bonus: your velocity will help create Velo City, and the Earth will thank you for it.

**Blog post author is not advocating that you should stick a library-card spoke card on your bike and enter an alleycat race a la fixed gear/bike messenger folk. Blog post author is advocating that you stick that special spoke card on your bike and head to the nearest library to research the history of library cards and bicycles. 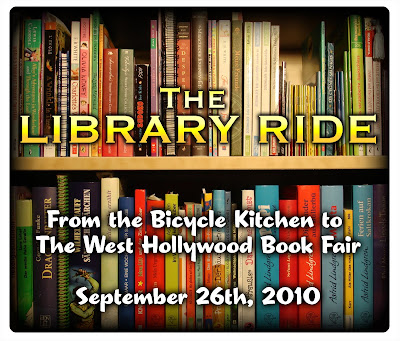 ETA: Too funny! I came across this event hours after publishing this post. "The Library Bike Ride," hosted by the Bicycle Kitchen, will take riders past several libraries en route to the West Hollywood Book Fair on September 26th.
Too bad I'll be getting ready to jump on-stage at the very same book fair when the ride is underway. Get this-- they're even gonna have limited edition spoke cards available! I've gotta try and get my hands on one of those.