I, Candy, Give You Eye Candy and More 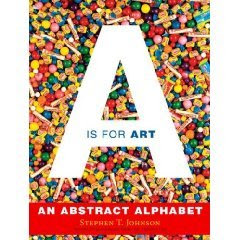 At ALA, I discovered Stephen T. Johnson's soon-to-be-released A is for Art: An Abstract Alphabet. No stranger to the alphabet book as a unique medium of expression, Stephen won a Caldecott Honor for his spectacular Alphabet City in 1996.

Six years in the making, A is for Art is a monumental achievement. To help illustrate the point, I will admit a false assumption my lazy brain made when I first saw the book: "Oh, how cool! He's exhaustingly searched through thousands of pieces of contemporary art to discover connections with the alphabet."

Not quite. It's even more amazing than that. Imagine if a letter had the power to dictate an artist's creation. "X" instructs the artist to use "x-rays and xerographs of xylophones," and, of course, the x-rayed and xerographed xylophone images must themselves form the letter "x."

What is so fresh about Stephen's set of alliterated constraints is that they are not restricted to subjects (nouns) alone. Descriptors (adjectives) and action words (verbs) also inform the creation of his pieces. For example, in "Ice Cream Floats," the "imitation" ice cream cones are "individually illuminated, isolated, immobilized, immersed, inverted, identical, and insoluble."

In his own words, Stephen had been, "exploring the English dictionary, selectively choosing and organizing particular words from each letter of the alphabet and, based solely on the meanings of the words, developing a visual work of art."

Back to my lazy brain. Where I had originally thought that Stephen searched for these alphabet connections in pre-existing art, he, instead, created all of the art pieces after having worked within a set of self-imposed, alphabet-based constraints.

The results reveal startling symmetries, that to a casual observer remain hidden. I use "symmetries" in the broadest sense of the word. Stephen's compositions display a harmony and order that invoke an almost mathematical beauty.

"Golden Sections" is a painting based on the letter "G" that depicts a visual representation of the "golden ratio" (think nautilus shell chambers). The letter "G" can be clearly discerned as we follow the fractal through several recursions.

In its color palette and use of media, "gradations of green, gray, and gold...rendered with gouache, graphite, glitter, granulated gunpowder, and glue," "Golden Sections" creates such a harmonic effect that one better understands Soviet scientist's V. Vernadsky's assertion that "a new element in science is not the revelation of the principle of symmetry, but the revelation of its universal nature."

Finally, I must comment upon Stephen's observation that "the self-imposed limitations and restrictive nature of using only words from each letter of the alphabet to generate an original creation have turned out to be truly liberating."

As someone who works with constraints myself (I'm currently working on a 32-page picture book that tells a story using only words that begin with the letters "qu"), I am in complete agreement with Stephen on the power of constraints to unleash creativity. It's a paradox, but that is probably why it works.

I encourage other writers and artists to play with constraints and then get ready to get the heck out of the way as they witness works create themselves. There is much inspiration on this path to be taken from the Oulipo, the French group of writers and mathematicians who undertook serious work in this direction starting in the 1960's.

Stephen's work is concept art at its most meaningful and accessible, ready to tickle the brains and eyes of children of all ages. His work truly exemplifies the notion of "ideart," in which the concept (idea) and its artistic expression are one and the same.

A Is for Art will provide plenty of eye candy, even literally (one needs only to look at the book's cover); but it will also provide a richness of layered symmetries, like a set of nesting Russian dolls, on each page. I applaud Stephen on his genius creation and the bold support he received from Paula Wiseman and Rubin Pfeffer to help make it happen.

Visit Stephen and his work at www.artandideas.com.