The Picasso Picture Book Scale: The Art of Bullshifting and the State of the Contemporary Picture Book 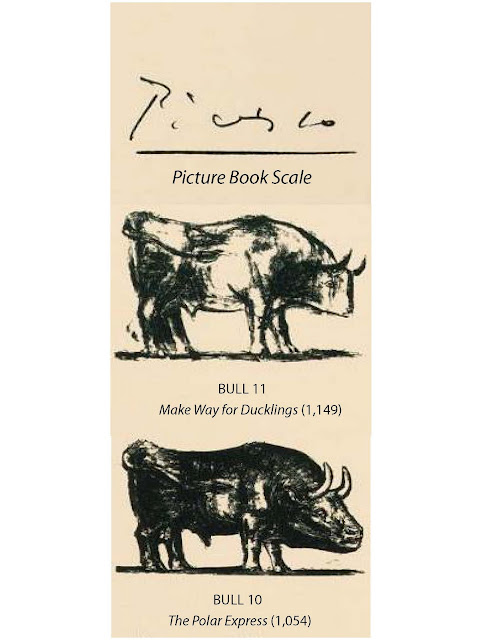 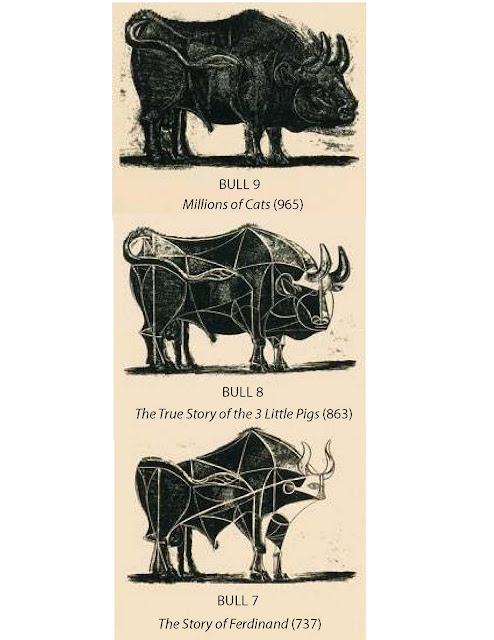 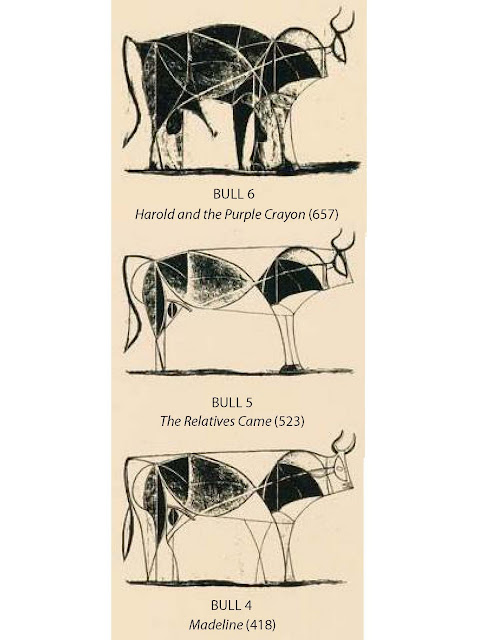 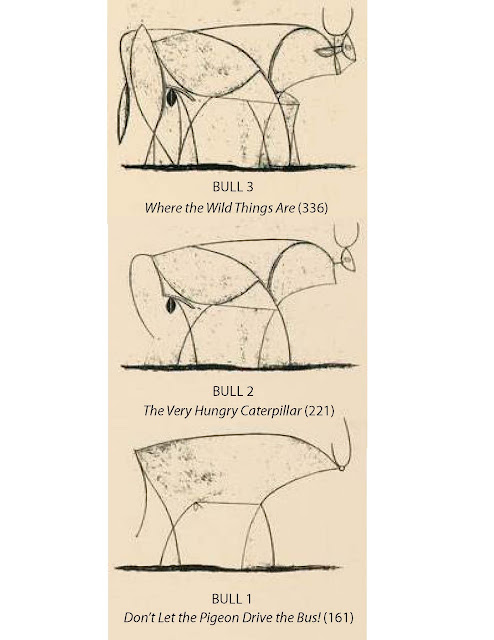 Inspired by Picasso's Read Period, a growing preference for less bull in my own picture book writing, and recent discussions on the health and prognosis for picture books, I decided to create the "Picasso Picture Book Scale," subtitled "The Art of Bullshifting."

Based on Picasso's lithograph series from 1945 titled Le Taureau, I find it useful to imagine the spectrum of picture book lengths as analogous to Picasso's abstraction of the bull.

Am I just feeding you a cock-and-bull story? Absolutely not! Though I hope by the end to impart a little of what I've learned from the art of bullshifting.


Here's a run-down of the featured picture books:


Picture book writers and readers can follow the genius of Picasso from "Bull 11" to "Bull 1," as he shifts from full bull to essential bull, from the corpulent to the core. By the way, don't you find it apropos that our token toro, Ferdinand, would settle his hind-quarters nearly two-quarters the way through the scale? (And never before or since has bullsitting been so provocative, or would that be provacative for my Spanish readers?).

Comparing Robert McCloskey's Make Way for Ducklings (1,149) to Mo Willems's Don't Let the Pigeon Drive the Bus! (161), we observe how different choices (both in word counts and art styles) made by different artists affect the stories they tell-- neither one intrinsically better than the other, but certainly revealing what each artist felt to be the best way to tell his story.

Peruse the "Picasso Picture Book Scale (PPBS)" and take stock of where most of your favorite picture books line-up. Are they all over the place? Do they stack up near "Bull 11," "Bull 7," or "Bull 4?" Do your tastes in art and music follow suit? Do you prefer realism, abstraction, or a balanced blend? Are you a "flesh and fur" lover? Or do you feel everything's in "the bones?"

One of the recent discussions on the ailing state of picture books cites brief texts as the main culprit-- what would appear on the PPBS as all bulls charging towards "Bull 1." In her School Library Journal article, Anita Silvey writes, "But in the picture book arena, the prevailing wisdom is to shackle writers and get them to be as creative as possible with very few words." She goes on further to state that, "...I’d have to argue that a basic diet of picture books with an anemic amount of text doesn’t really do the trick."

Gulp, those words are like a red rag to a bull for me, but I do understand Silvey's perspective and appreciate her boldness in sharing it. I'm of the persuasion, however, that the problem isn't inherently in the shortness of contemporary picture book texts, but rather in the crafting of those texts.

I think the Picture Book Proclaimers hit the bull's-eye with this statement: "Imitation, laziness, and timidity are poisoning a great art form." What more can I add? Life's just too short, folks, and my tolerance for shoddy art is even shorter.

This is a rallying cry for all of my comrades writing short picture book texts-- we must overcome the stigma of "less is less," when we know that "less is more." Occam's Razor has served many fields well, and ours should be no exception.

We should take the bull by the horns and work from the wisdom of Einstein's words, "Everything should be made as simple as possible, but not simpler." So, it's okay if "Bull 1" is your target, just make sure you give it its requisite legs.

Minimal text should achieve essential meaning. The great haiku Masters have already paved the way. And so it is, I feel, that for the sustainability of shorter texts, the picture book writer must become more poet than storyteller the closer we move down the scale to "Bull 1."

For the writer of short picture book texts, sound and image overtake plot and character. The latter two elements shift more to the domain of the illustrator. The shorter the text, the harder each word has to work to elevate the writing. This is what poetry is all about-- working with constraints to create language as art.

And so I've made my stand-- I will remain bull-headed in my determination to write short picture book texts. I've moved from "Bull 7" with Animal House (752 words) to "Bull 1" with Ribbit Rabbit (158 words) and Moo Hoo (157 words), and I've found home. For me, it's all about the bones.

I know that I currently write for the five-and-under set. And I feel my greatest challenge is to intimate to children the beauty and complexity of our wondrous language. There are patterns as profound in language as any in nature, and I write to discover and share them.

Let's honor the musicality of language and do right/write by our young audience. Put story to the service of sound and see if that doesn't take us homeward bound. No matter what, there's no room left anymore for bull-- unless it's the return of a bull market for picture books. Toro, toro!

Titles selected based on this list compiled by Betsy Bird.

By the way, there's an amazing dearth of picture books with word counts in the 500s and 1000s. Who knew?

Oh, and if anyone sees dear ol' Ted driving from Springfield, Mass., to La Jolla, CA, could you please tell him that I left my sunglasses in his car? I'm blinded without them.